Around Christmas, I had one of my periodic brilliant ideas and threw together a bunch of junk from my bits box to make some post-apocalyptic market stalls. The project developed gradually over the next months; I put together a load of civilian models from different manufacturers and various trade goods and merchandise. Some of them are here in these photos I took over the weekend.


A lot of manufacturers are represented, including Oakbound Games, Ramshackle Games, Blind Beggar Miniatures, ThunderChild Miniatures, Wargames Foundry, Wargames Terrain Workshop, Fox Box, Prince August, Grenadier and more. I particularly want to thank Ramshackle, Oakbound and Blind Beggar, who provided some of the models in this display free of charge!
Posted by James Holloway at 01:23 11 comments:

My wargaming table sits in the middle of my study and is normally just a regular 2 x 3 table that I use to ... well, keep covered in piles of books, traditionally, but also to do write-y tasks like making notes or marking papers. It can unfold into a 4 x 3 table. But for the larger, 32-point game of Dragon Rampant I was going to be playing on Saturday, I was worried that 4 x 3 might be too crowded. So in a fit of efficiency on Friday night, I experimented with something.

Years ago I decided I was going to build a modular tabletop for this table. I went and bought an 8 foot by 4 foot piece of plywood and had it cut into four sections, and then ... then I just put the bits in the shed and felt shame every time I looked at them. One of the pieces became an impromptu workbench in the study when placed on top of a bunch of rolling drawer units and that was it.

So on Friday I just went at it with some duct tape. 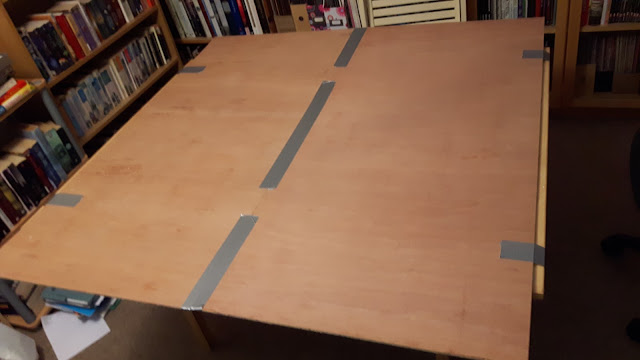 The edges that stick out below the table base are a leetle bendy, but not terribly so. The downside is that all my grass mats and stuff are supposed to cover a 3 x 3 area, so I'll need to get some new coverings. Anyway, I improvised what I could and the result is that I played some Dragon Rampant!

This shot from our second game shows his general and scouts taking up a position on the right of the line together with the pike unit. 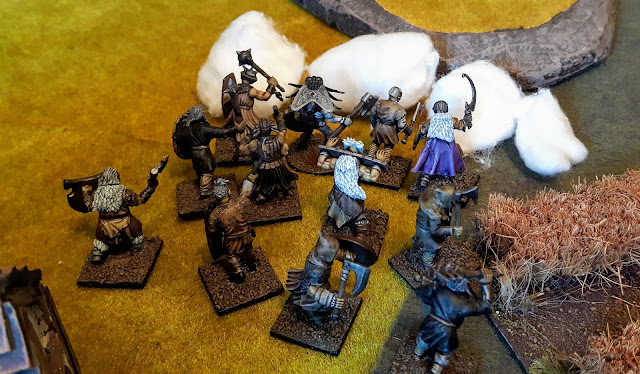 My Chaos cultists advance under cover of a mystical fog. Those guys soaked up a lot of crossbow bolts and arrows and achieved nothing other than that. Which is fine, but they cost five points. They could be swapped out for something a little less expensive and still act as bullet sponges. 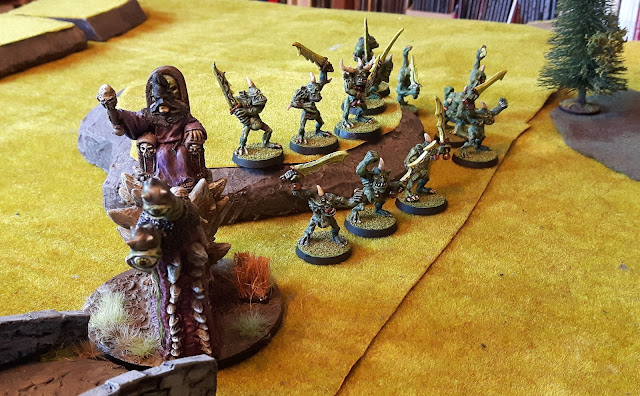 My MVPs were the Battle Snail and the demon packs, who carried all before them. The role of the demons in my army is to inflict a lot of damage and then die like the six-strength-point dogs they are.

I had a good time, and am pretty happy with where the army is at the moment, although the light foot are going to get slightly amended for my next outing. I definitely need to find some large, stowable covering for the new tabletop, which will also get packed away when not in use. If I can't do it cheaper than a printed gaming mat, I will just get one of those.
Posted by James Holloway at 02:30 2 comments:

Paint situation: getting ready for BOYL

Well, here it is the beginning of June, and that means that this year's Bring Out Your Lead event, which will be my third, is just two short months away. I've got my hotel room booked and some games scheduled, which means it's time to start thinking about my painting needs. Here are the games I am thinking of playing and, consequently, the things I ought to paint.

A new edition of Necromunda obviously has the Oldhammer community's whiskers twitching excitedly, so I expect to get some games of this in. I have quite a lot of models I can use for this and I have already costed up Ork and Chaos kill teams. One of the marines in the photo needed a new base but that is now taken care of.

I should paint up a few more cultists for recruiting purposes.

This big interactive table will feature lots of different little games in a post-apocalyptic-type Rogue Trader setting inspired by the alien world depicted in the RT rulebook. I need to stat up a gang according to one of the many editions of Necromunda, but I don't anticipate that being too much trouble other than being spoilt for choice.

I also need to paint up a jetbike (or two) for the jetbike races and complete some more terrain, as I've been asked to set up my marketplace as part of the scenery.

Like Helsreach but for fantasy! My goal is to paint up a party of adventurers, all of them Citadel models from the 80s. I already have a Cleric and a Wizard, so I'm just going to paint up one of the AD&D Rogues and a Heroic Fighter to complete the set. Although maybe I should just use Lastro Lupintal as my rogue. That would mean I was 3/4 done and I would have a dwarf. Anyway, point is I have options and this is a lower priority.

There was supposed to be a Rogue Trader thing happening, but I don't know if it's still on. I will try to take one case's worth of Chaos or Orks just to play if needed.

To summarise, then, what I needed to paint between now and BOYL is:

I think that is feasible!
Posted by James Holloway at 01:09 2 comments: