Today, guest blogger Chris of Dreadnoughts and Dragons takes us back to the future with this look at 1980s classic Cyberpunk and its vision of the dark dystopian future of, er ... 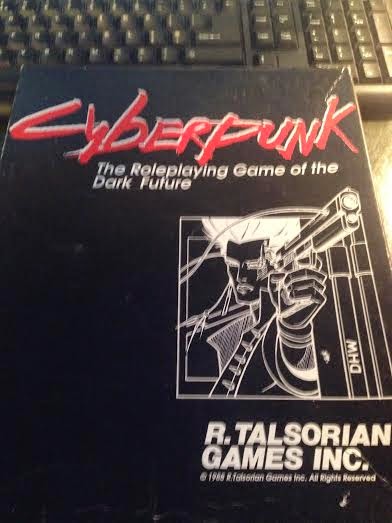 One of the greatest problems with roleplaying games in general is that they over-engineer solutions to problems that don't really exist, and ignore problems that would actually make life a little better. Of course, in the real world the exact opposite is true: technology advances fastest in areas where there is greatest consumer demand.

If you want an illustration of just how this can date a game, look no further than Cyberpunk: The Roleplaying Game of the Dark Future. Unfortunately, this dark 'future' is the world of 2013, as envisaged by Mike Pondsmith in 1988. I picked up the first edition of this game for £1, and found myself back in the world before the Internet. Imagine the bastard RPG lovechild of William Gibson and Don Johnson, then add more hair spray. How dark is 2013? Well, apart from being perpetually set at night (this is cyberpunk, duh) it's your basic corporate police state/impoverished street gang dystopia.

The 'cyber' side comes in the form of a worldwide network which you literally have to plug yourself into (to help out players who have never used a computer that didn't require a cassette tape, there are detailed sections explaining what a modem does).

The 'punk' aspect are the party-loving, tech-fixated gang members. The character creation guide states that your motive is to wear the coolest clothes and visit the coolest clubs. One of the nine classes available to play is Rockstar. The willpower stat is called Cool. Everyone uses a nickname ('handle') to sound as cool as your idol, Johnny Silverhand.

Thank fuck the game was wrong on that score.

It's not the only glaring anachronism. In a world where the first NPC you meet (an uninteresting hacker girl called Alt) has a “gold-plated cyberarm with hidden compartment”, mobiles are still giant bricks the size of walkie-talkies. 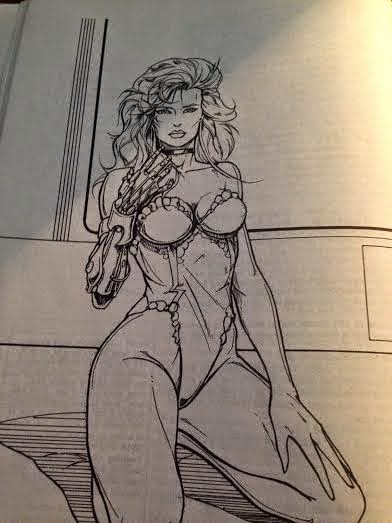 In fact, it's worth noting where Cyberpunk gets it right, and where it gets it wrong:


Anachronisms aside, Cyperpunk is surprisingly easy to pick up and play: you can generate a character very accurately in a few minutes. Part of this is because it removes any real say in your character's background; you have to pick from one of nine classes (including Rockerboys, Solos, Cops and Corporates), each with a single special skill. You're then encouraged to generate your life history, with one event per year after 16, roll for your sweet sense of style, even roll to see who you care about.

This is all very, very easy indeed to get moving: I generated a full character in under 10 minutes, who ended up a 'silly fluffhead' rockerboy addicted to drugs and with a mental health problem, who dresses in battle armour and spiked heels, has a kid sister who looks up to him, and a pet cassette tape that he loves more than anything else in the world.

While it can appear simple, there's more than enough detail to go on. The three books (my edition also has the Friday Night Firefight expansion) come to a whole 150 pages, but have detailed corporate biographies, walkthroughs of games, and even encounter generators for anyone who wants to surprise their players with chance run-ins with celebrities, gangs (the 'Bradi Bunch' is mentioned as a particularly vicious band of miscreants) or corporate secret police.

Overall, Cyberpunk is silly, simple and hopelessly outdated. It's pretty much a defining game for the 1980s.

Chris also points out that to send a fax you type it into a computer, which sends it to a local post office, which then prints it out and delivers it to the recipient; also, adding call-waiting and autodial to your phone costs $2600.

Now, I went to high school with computer-loving kids in the 1990s, so obviously I know a lot of Cyberpunk fans, although they mostly came up playing the second edition. Despite all that -- and despite that same edition being one of the games owned by the cousin who set me on the Call of Cthulhu path -- I have never actually played it. Have you? Did you update it or was the retro-futurism part of the appeal for you? Let us know!
Posted by James Holloway at 03:07 2 comments:

It's November again, and for me that means it's National (although I am in a different nation) Novel Writing Month. I've written before about how I find that games and constraints help me do creative stuff, so despite some reservations about the format, I try to do it every year. I made a hell of a mess of it last year. The year before, I wrote The Barest Branch, which I am pleased with in spite of its flaws.

In short, there might be a little bit of a drought here for a while as I focus on that -- but it's only temporary! I will still be posting here and on my other blog, just less frequently.

However, I did get to do some gaming the other day! I went down to a group that organises one-shot games, usually indie games, here in Cambridge. Only a few of us turned out (the group wasn't running on its usual night), so we played us a game of Microscope.

This is a neat collaborative setting-history-creation game in which each player contributes periods, events and scenes according to a set of procedures that distribute different tasks and prompts -- it's got enough freedom that you can do anything you want, but enough structure that it isn't just "you tell a story. OK, now you tell a story." And because the setting is created in a non-linear way, it's super easy to create interesting narrative arcs; if you see something you want explained, you just go back and stick in an earlier explanation. Here's the setting history three of us created in about two hours (although it's not super legible):

So, yeah, I'm definitely picking that one up. So far so good.
Posted by James Holloway at 12:09 No comments: