I was in a charity shop a while back when I came across two jellyfish ornaments, which I assume were from some aquarium gift shop. I decided they'd be good D&D or Rogue Trader monsters, then chucked them in a drawer and forgot about them. A while ago I pulled them out, only to learn that they're really too big and unstable for traditional GW-style flying bases.

If the model is big but not heavy, a great substitute for this kind of base is a plastic wine glass. You can get a pack of six of them for £1, and they allow flying models to occupy the same space as a model on the ground, since the mouth of the glass is open. I carefully trimmed down the stem with a pair of clippers, and hey presto. The photo doesn't capture the shimmery, slightly translucent effect of the plastic very well, so you'll just have to take my word that they are very nice jellyfish toys. 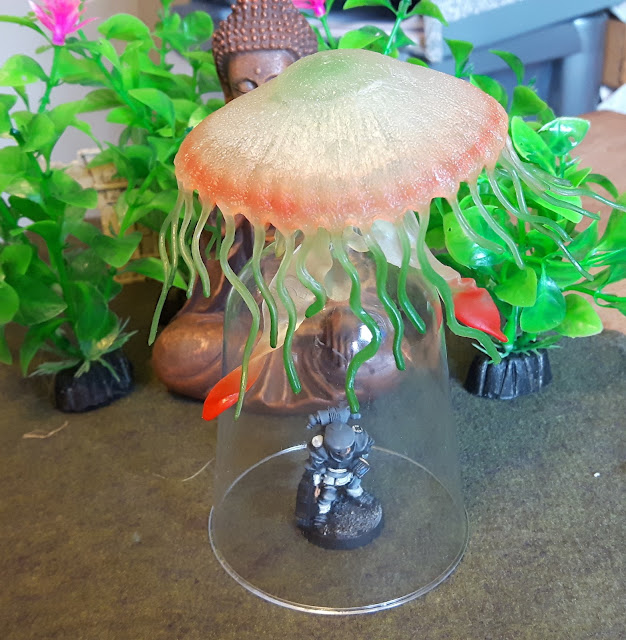 The alien being hovers over Inquisitor Stompheader. But what does it want?!
Posted by James Holloway at 01:11 No comments:

On the way home from a gig the other day, I stopped into Poundland. They had some little Buddha statues in different poses and I picked one up. I think he'll make a fine objective or piece of scenery for some types of skirmish gaming, although if I'd been smart I would have got several and used them as the basis for weird sci-fi conversions. 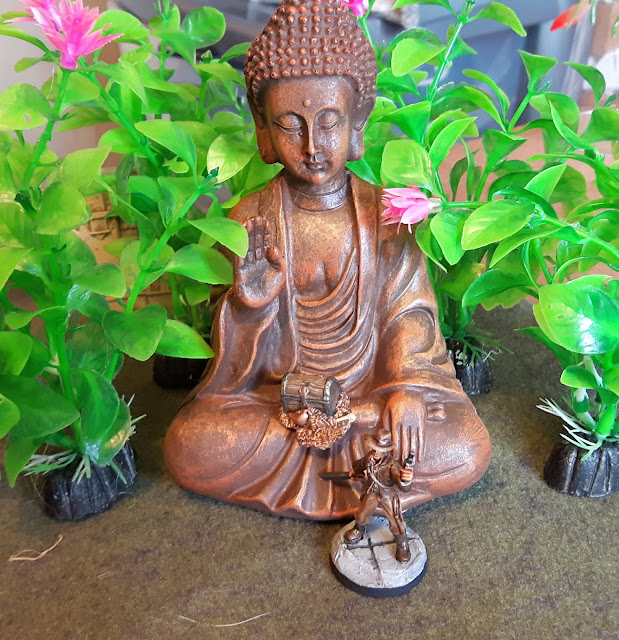 In the depths of the jungle, Doctor Jones goes looking for artefacts of ... historical significance. Yeah, that's the ticket.
Posted by James Holloway at 04:47 No comments:

In a previous post, I introduced you to Sir Gilbert de Utahraptor, Chevalier de Jurasse. I haven't decided whether he is a noble knight transformed into a lizard by a witch's curse or a baby lizardman raised to be a chivalrous paladin by a goodly old knight who happened to be blind. In either case, here he his with his squire, Godefroi. Judging by his expression, Godefroi doesn't take being an outsider in society with Gilbert's level of chivalric fortitude. Perhaps he is upset because his curse separates him from his lady love, the Fair Gwendolyn. Yeah, capital F, that's how fair we're talkin'. 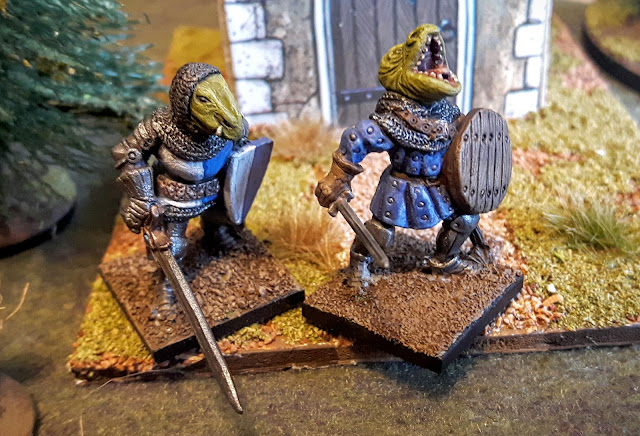 The models are Essex fantasy figures, which I got for free at Oldhammer weekend from that chevalier sans peur et sans reproche, Stuart Klatcheff. Wottaguy. Only the sword, which a spare Wargames Factory Viking weapon, is new. I made him the squire just because his shield isn't as nice. It's a bit of a rushed paint job, but I found it quite a tricky model to do well.
Posted by James Holloway at 01:04 No comments:

Low-content mode continues but I have done a little painting. I made some progress on my painting challenge with Tim of The Responsible One's Wargaming Blog, but while that goes on, here's what I've finished in the meantime.

This cool dude is a Ramshackle Games model, a Dunger. He was a free miscast that I got given by Ramshackle's Curtis Fell back at Oldhammer weekend. I touched up the damaged parts with a little simply sculpted fur or changed them into features of the model, like the broken tusk.

I really like the Jim Henson look of this model, with his adorable growly face, and I'll definitely get some use out of him.
Posted by James Holloway at 12:42 1 comment:

So here's the thing:

So for the foreseeable future, at least until the end of November, I'm going to an irregular schedule. I'm going to update when I can, and hopefully that won't be never, but I'm not going to break my neck to update every other weekday.

Sorry about that and hopefully it won't be long until I'll have something fun here for you all to read.
Posted by James Holloway at 03:42 No comments: