In late 2013, before everything got super busy for us both, a friend of mine and I were amusing ourselves making wargames terrain out of junk. Here is an example of one such piece:


You can find a not-really-any-better photo in this old post.

I think my favourite thing about this model is that the frame came from a little plastic basket that once held olives or something -- or maybe it was cheese, I don't remember -- that my wife saw and thought "this could be useful for terrain-making." She was right! Also the till rolls were a gift from a friend, so really this piece was a community effort.

Stick-on crafting gems are a great way to greeble surfaces. I use them for rivets and things as well as flat panels, having got the idea from Lee Erickson, who has the knack for this kind of thing.

Inspired by recent posts on using junk for miniatures, I have been moved to repost some stuff I did for a long-ago Trash Bash contest over on Roebeast's Magical House of Sunshine. I loved those competitions, but there doesn't, sadly, seem to have been a 2014 one. Perhaps I should try to fill the gap?

Anyway, as my 2012 entry I built a large diorama, but I didn't wind up using most of it in actual play. One part of it I did use, however, and that is Station 32. This image shows the parts this model was made from: scrap styrofoam from my old job at the hospital, a blister pack from a pound store toy, a part from a broken toy (also from Poundland), some filler and glue and lots of little bits of scrap card. 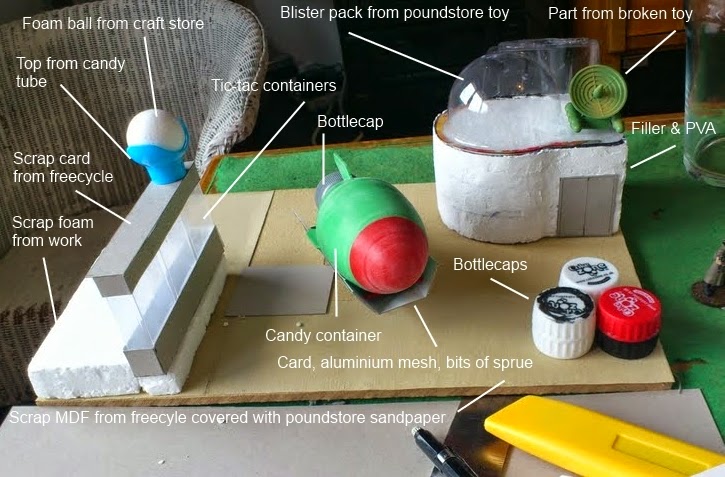 The lighting isn't great, but here you can see the finished product with a model from em-4 (formerly Grenadier) for scale. I think it looks not bad, considering that the components cost me less than £1 all told. The signs are a mixture of airplane decals and images I printed out from the internet. 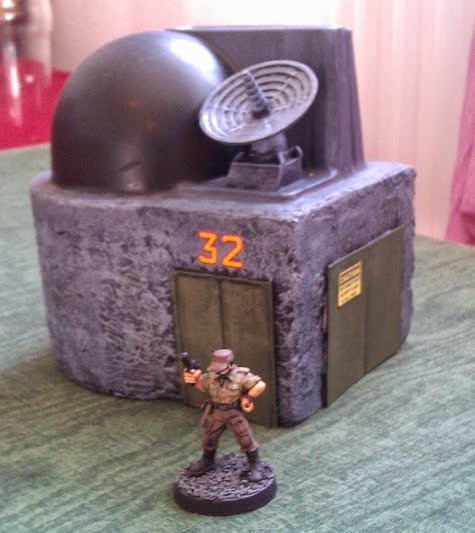 Posted by James Holloway at 03:01 No comments:

I popped into Poundland on Tuesday and emerged with some cheap plastic toys. For a long time I've been avoiding buying these guys because they're pretty big, but my D&D campaign is getting to the level where they're going to be beating up on ogres and trolls and stuff and maybe there'll be more demons and things later on. So I decided to pick up a few huge dudes. They're sold under the name “Journey to Creation” and I think they might actually look OK with a coat of paint on 'em. We'll see. Here they are, seen with D&D campaign regular Torchy the Torchbearer.

I also picked up this bad boy on the left, who is a cyborg dinosaur. I think that his neck should be just narrow enough that I can get a pair of legs around it and build him a rider. I'll probably never be able to use it, but it'll still be pretty badass. The guy on the right is an earlier Poundland find. 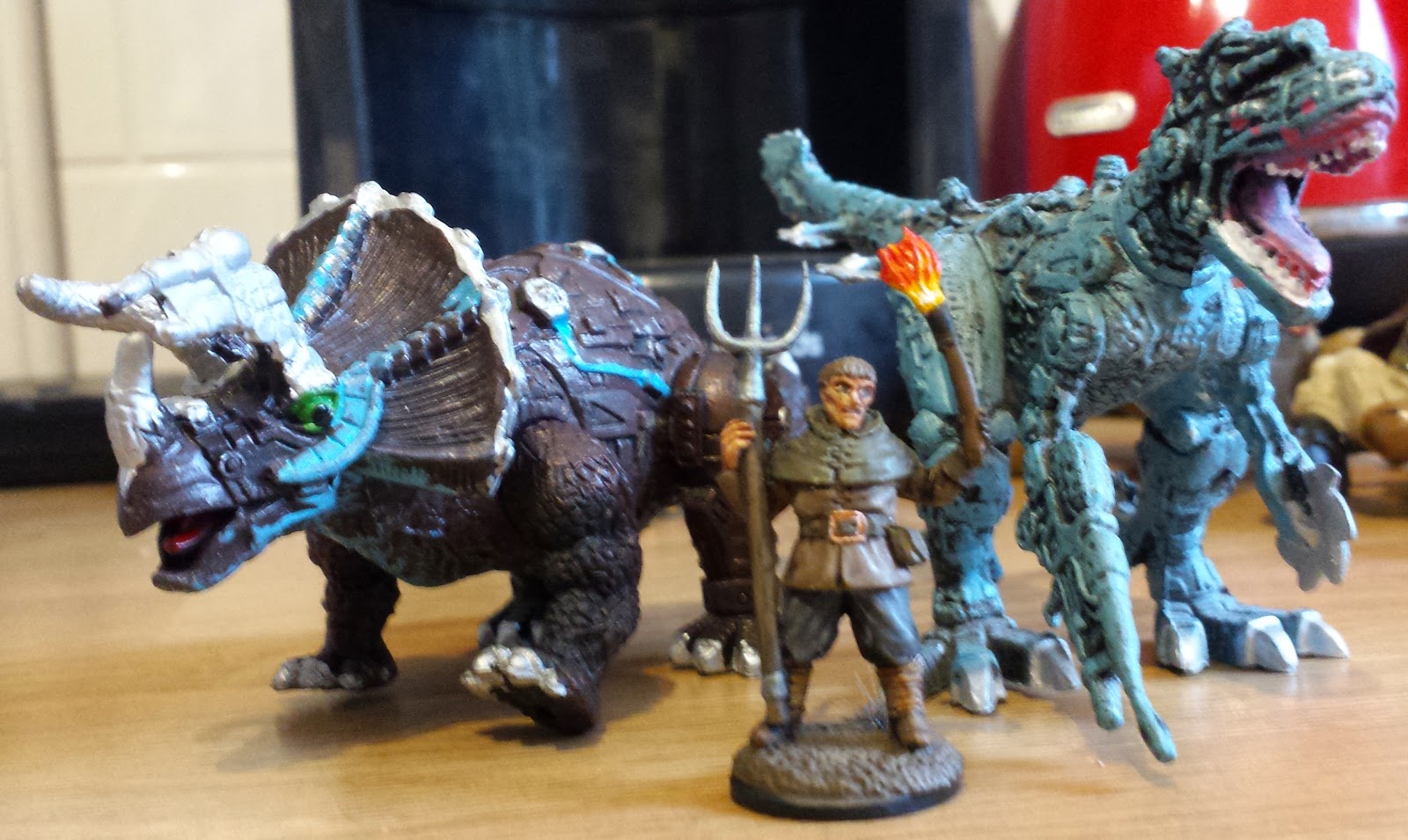 However, I don't like the horns. I may have to do something with those.
Posted by James Holloway at 04:00 No comments:

In late November, I was at a car boot sale when I came across a lady with a big bag of plastic figures for £5. I didn't recognise the models, but what the heck. I picked it up, brought it home and discovered that I had acquired 14 RTB01 Marines, a couple of Skeleton Hordes skellingtons, an old Fantasy Regiments Skaven, and a metric crapload of these guys:

They turn out to be the plastic figures from the original Dungeonquest, and as you can see in the background there are loads of them. I only had a small number of complete sets, and many of the barbarians had broken horns, so I flogged off a few of the complete sets, kept one for myself and set about thinking of something to do with the other guys.

Then, after seeing cool conversion posts by Asslessman and The Responsible One, I was lying in bed, drifting off and the phrase "techno-barbarian" occurred to me. This is a term that comes up to describe the tribes of Earth in 40K literature, and a vision of the barbarian guy from the photo done up all post-apocalyptic appeared.

The next day I began chopping and sticking, with the following results: 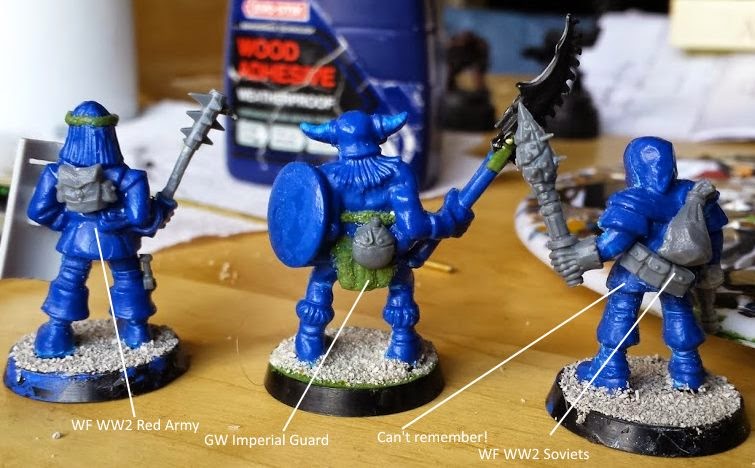 I trimmed the broken horns into stumpy little horns and filed the barbarian's shield flat, replaced some hands and weapons and crudely sculpted a loincloth and headband from green stuff. I suck at sculpting, as you can see; this is only the second time I've ever really tried it.

They sat around for a while while I found the time to paint, and then I got to work: 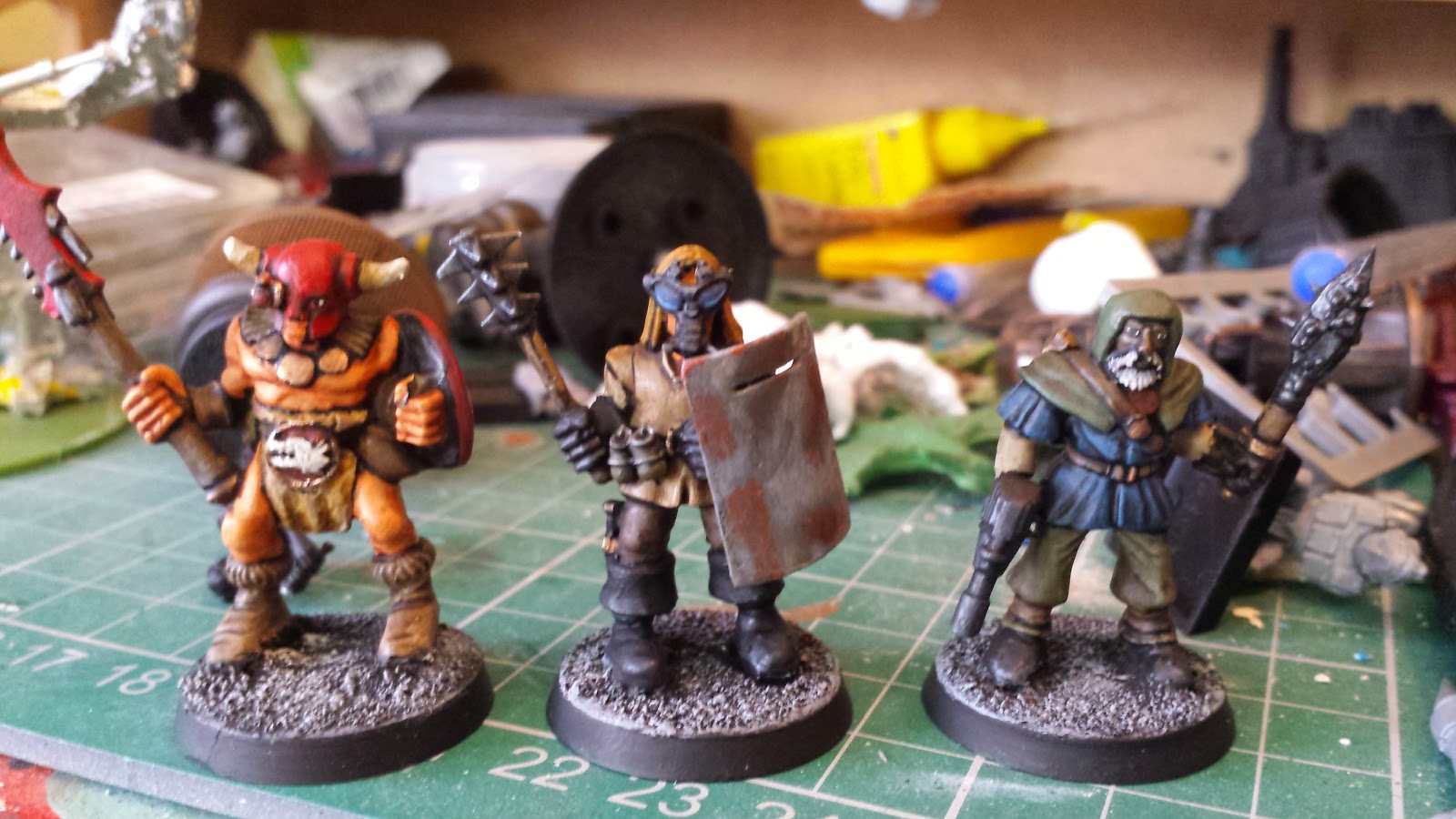 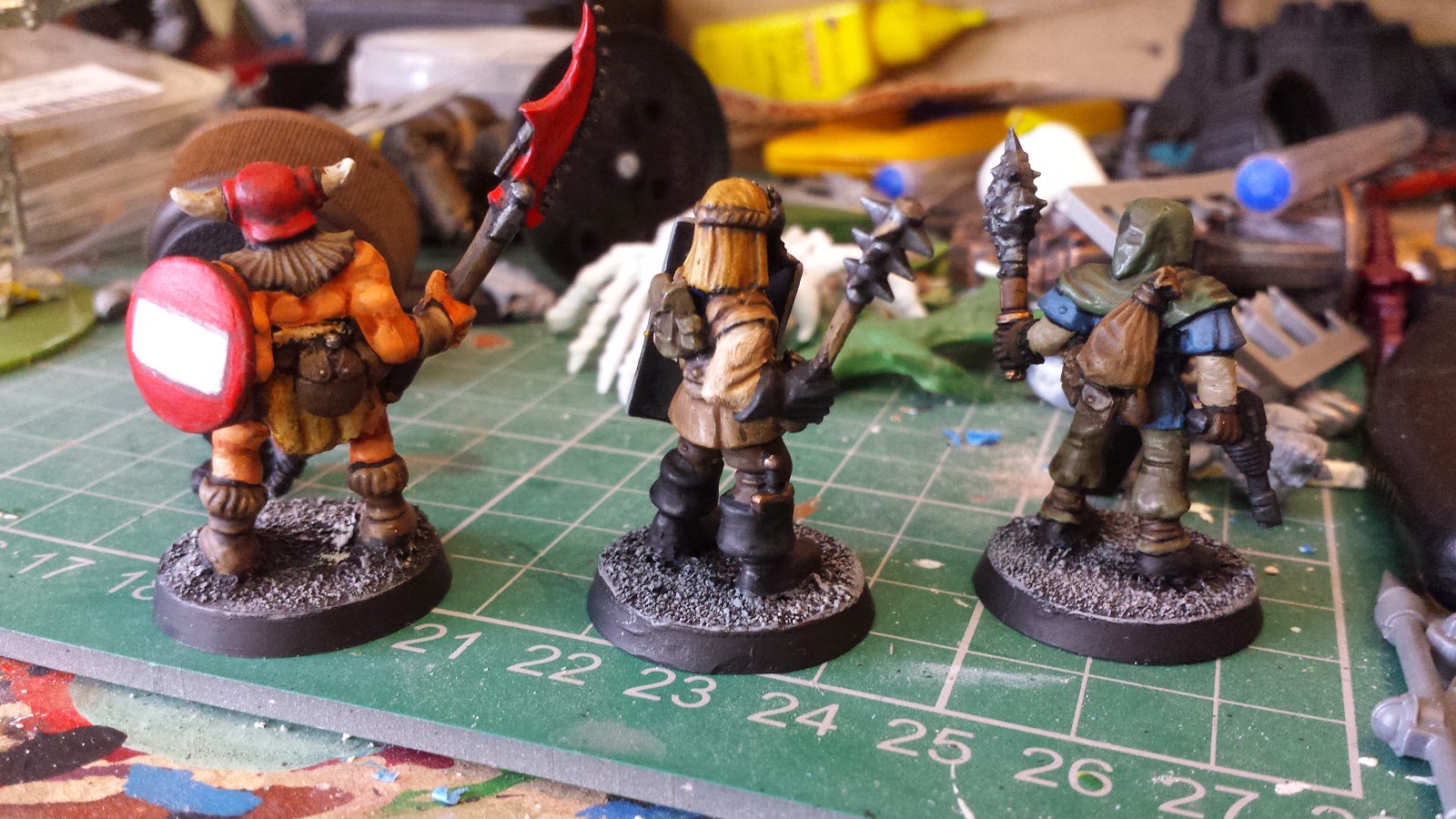 I think they came out OK! I liked the idea of the barbarian's shield being an old road sign, and I think I'm happy with the guy in the middle, whose face mask looks sinister as hell. The blue on the guy on the right may have been a misstep.

Anyway, they're simple models with simple paintjobs, but I think they came out quite nicely. I may have one or two more conversions to do -- I'm almost out of barbarians, but I have a ton of the other ones. Hell, if anyone wants one, you can have some for the cost of postage or as a swap while supplies last.

Frugality: my HotT goblin army for less than £10.

So I commented on The Back Bedroom that I'd been playing some Hordes of the Things and De Bellis Antiquitatis using 1/72 scale plastic miniatures.


(I am actually playing with the older second versions of these games. I wonder if the 2.2 version of DBA is in English?)

I love 1/72 models, but they don't seem to have a lot of traction among wargamers and I'm not sure why. I suspect it's because older 1/72 figures were typically not of great quality -- they were stiff in their poses, inaccurate in their equipment, and very bendy and difficult to paint. These days that's still true for some kits, but a lot of new stuff is really very good -- and for fantasy, of course, inaccuracy goes out the window. There isn't a whole lot of choice out there for some things -- they're great for humans, but there are only a very small number of fantasy or sci-fi manufacturers.

Regardless, here's one of my armies. Again, my photography is terrible; in fact, I think it's getting worse. Perhaps it's the winter light.

The goblins are from Caesar Miniatures -- a lot of the Caesar fantasy models are hard to find these days, but you can still get the goblins from Model Hobbies for £5.39 plus shipping. I wanted to vary the army up a little, so I bought dinosaur toys from a 10p basket at my local charity shop. There are eight in total, so that's 80p for a total of £6.19. I used precut MDF bases from East Riding Miniatures but you can get bases anywhere. I also used a couple of spare GW flying base stems I had, but again you can get those anywhere -- em-4 will sell you 15 for a quid.

Even counting the cost of the bases and all, then, this army cost less than £10, and I think it looks pretty good! I could have spent a little more time on the paint jobs and I could certainly have spent more time on the bases, but with a little elbow grease you could create a really beautiful army.

And if you want to do a historical army for DBA, or a human-dominated fantasy army (I keep wanting to do Orlanthi and Lundar ones), it's no problem at all. There are hundreds upon hundreds of boxes of human historical figures from all periods, with dozens of models for under £10. The best place to find out about 1/72 historical miniatures is undoubtedly Plastic Soldier Review, which gives good images of every figure in every set.

I've got a couple more of these fantasy armies, again based on Caesar figures but also some Imex/Emhar and some HaT and so on. If people are interested, I could do some future features?

Email ThisBlogThis!Share to TwitterShare to FacebookShare to Pinterest
Labels: frugal gaming, Hordes of the Things, miniatures

So I have done some painting recently, and, as I promised in my last post, here are a few of the models. I am not a good photographer and I don't have a proper lighting setup, so think of these as journal-style candids, not "look at my cool models." These are just the ones so recently painted that they haven't had time to go in a case yet (or ongoing projects, which don't have a case yet). 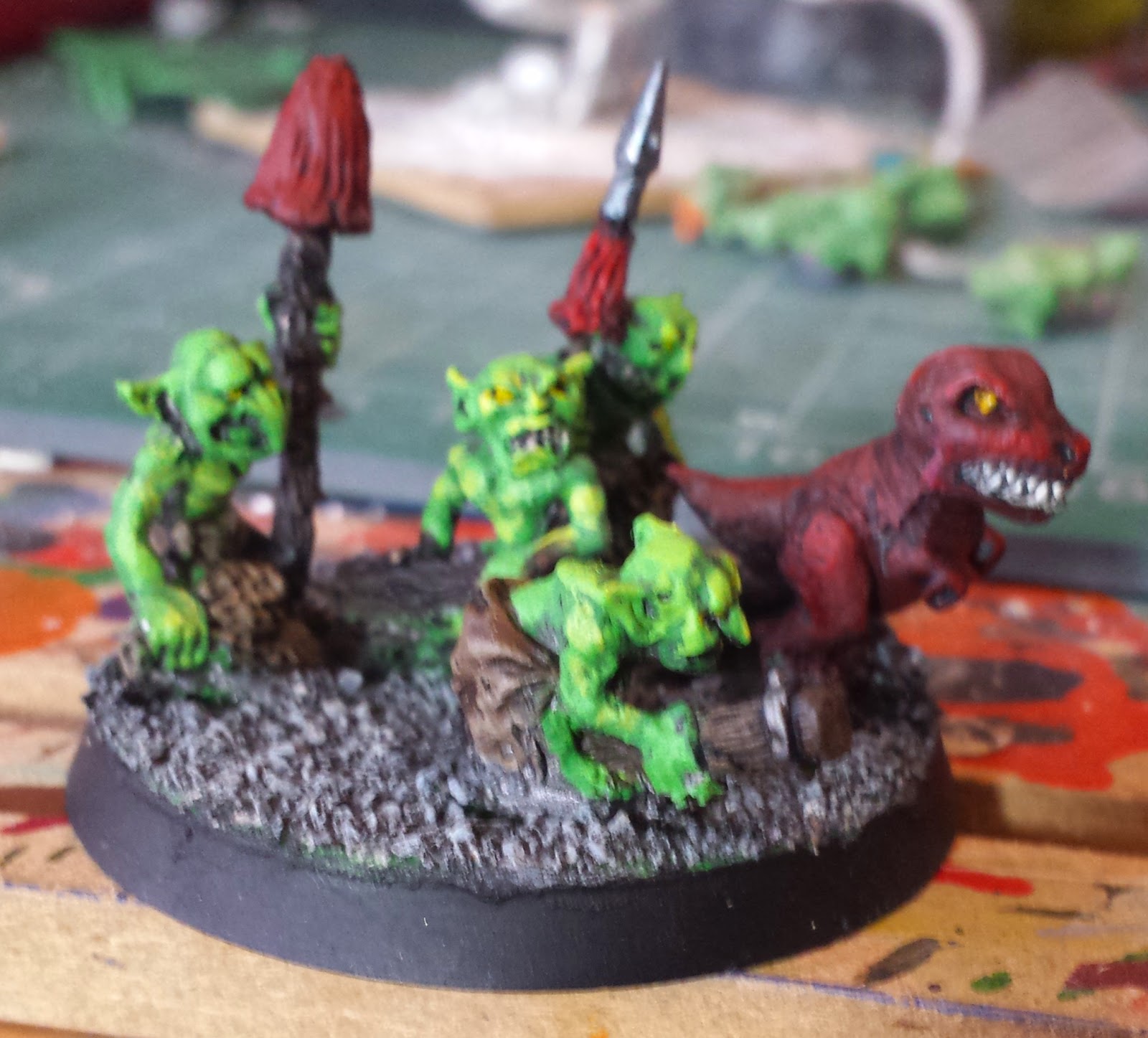 I have a painting New Year's resolution. Well, two. The first is that I'm not going to use my old painting score system any more. I used to keep track of the number of figures I painted minus the number of figures I acquired, which was fun but tripped me up any time I bought a larger pack just to get a smaller number of models, and which was also a mess when you consider 1/72 figures. Instead, I'm just going to keep track of what I paint and the hell with the other thing. 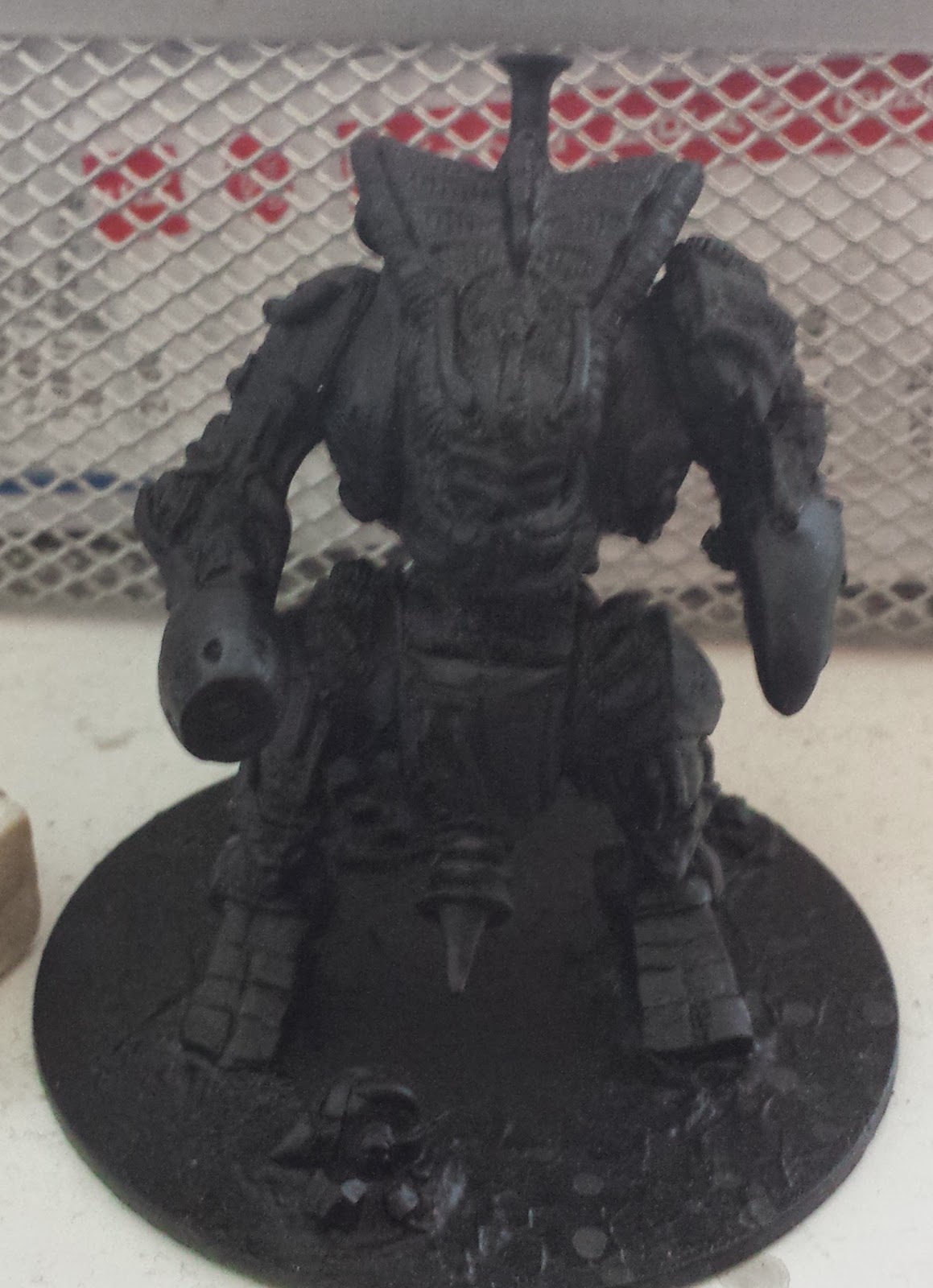 Posted by James Holloway at 05:23 No comments: