This weekend I was off once again to Bring Out Your Lead, an annual event where members of the Oldhammer community meet up to play games, look at other people's games, talk about games ... you get the idea. It was hosted, as it was the last two times I went, by Wargames Foundry, who made some special models available for the event.

So, enough backstory! Let's look at what was there.

I turned up Friday afternoon to find that the main tables were set up and games were already under way.


The game I was mostly there to play was Helsreach, a Necromunda-ish multi-player skirmish set around a single enormous city and wasteland board put together by Curtis of Ramshackle Games and Aidan of Warfactory. This was what I'm gonna call a "megaboard" -- that is, it wasn't a single terrain board for a single game, but a board on which essentially several different games were happening. There were many different skirmishes going on simultaneously, blending into one another, plus, at various times, a jetbike race, a grox-herding game, and so on. This allows the host to get maximum use out of the effort spent on terrain, and I think it's going to catch on.

Speaking of megaboards, there was also a fantasy equivalent: Heldenhofen! This was a huge Warhammer city and outskirts created by the chaps from G.R.O.G (if I've got that right), including Geoff of Oakbound Games, Harry and Chris. It had:


And more. I did play a game of Bier Bowl, the five-a-side pub version of Blood Bowl, and good fun it was, with tense and action-packed turns that added up to a complete game in less than an hour. But the main thing I was there for was Helsreach. Here are a few action shots from that table (these are really from all weekend, but they should give you an idea of the kind of thing):

Other games were going on too -- I didn't get many photos on Friday, but there were people playing WHFB, Space Fleet, Dark Future, Rogue Trader and lots of other games.

As is traditional, there were free figures to be had, donated by the generosity of community members. One was the mayor of Helsreach (the regular guy, not the alien beast) from Ramshackle, and the other was this familiar figure, sculpted by John Pickford: 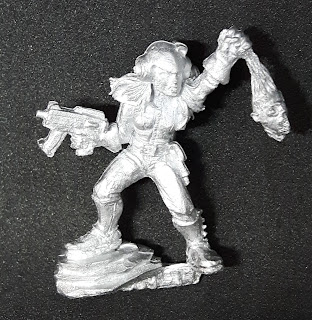 Not a bad haul for day one.

Saturday saw even more Helsreach action for me, plus a short-lived career as a Dwarf giant slayer in Heldenhofen, and by "short-lived" I mean "died like a dog on turn one." There were also the Helsreach jetbike racing and grox herding games, which I took some pictures of but didn't play.

Other stuff on Saturday included a lovely chat with classic gaming artist Tony Yates about our favourite Marvel Comics artists and the wild fact that these great creators were making things that weren't really meant to be reread, collected, studied or displayed. And of course there was the painting contest. I didn't get shots of too many of the entries, but I did snap pics of a few, including some of the winners: 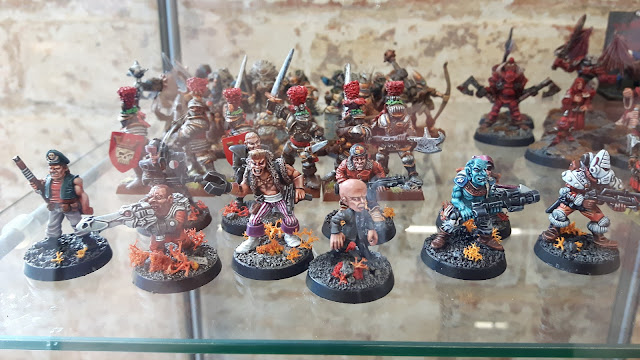 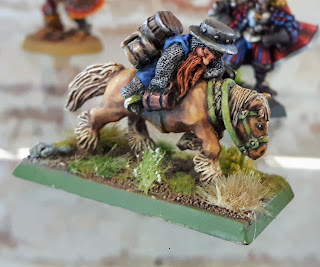 I mentioned Tony Yates, but in addition to him and (of course) Bryan Ansell, other luminaries of British gaming present included Tony Ackland, Kev Adams (sculpting for charity again), Rick Priestley and Nigel Stillman. Nigel brought his Bretonnian army: 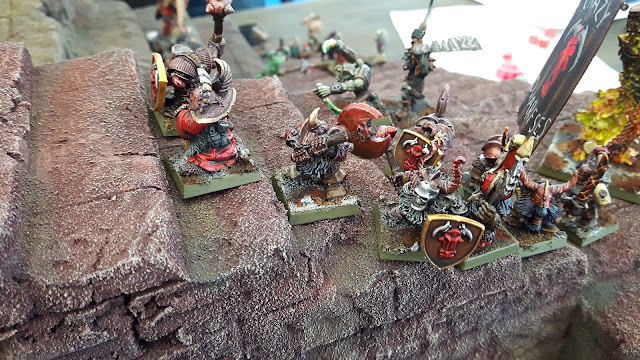 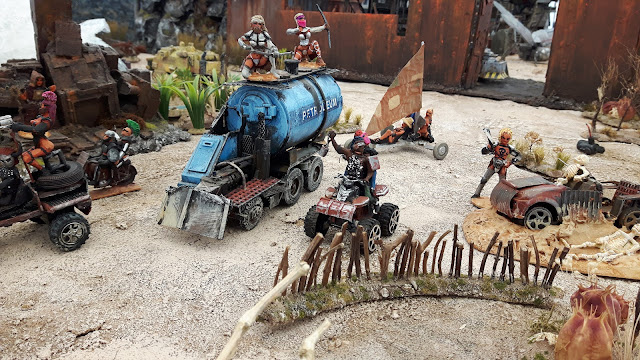 And there were so many other things I didn't get photos of! In particular, there were quite a lot of the smaller games going on -- a couple of WHFRP sessions, several games of Advanced Heroquest and similar. I also didn't get a photo of the Dreadnought bash game I played in; my poor Chaos dread got rolled. Perhaps I was a little too aggressive, but I was eager to get stuck in on its first outing. If you have any fondness for the Oldhammer aesthetic, or just like to see the crazy stuff people make. I can't recommend BOYL enough. The generosity and hospitality of the community astonish me every year, and I come away with new models, new friends and lots of new ideas for gaming projects.

In another post, I'll look at my model haul from this year and maybe even post some painted pics, so stand by for updates.
Posted by James Holloway at 02:37 10 comments: