The folks at PSC Games were kind enough to send over a pre-production copy of their new game, Battle Ravens. This is a two-player board game focusing on shieldwall combat in the Viking age; it's designed by Daniel Mersey, the creator of Dragon Rampant, Lion Rampant, and The Pikeman's Lament. A colleague recommended me as someone who knows a good deal about the early medieval period and also likes to play games, so I wound up with a copy. Let's take a look! 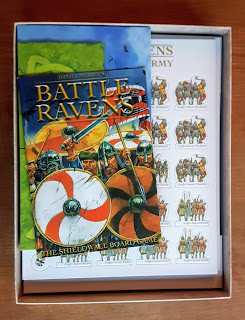 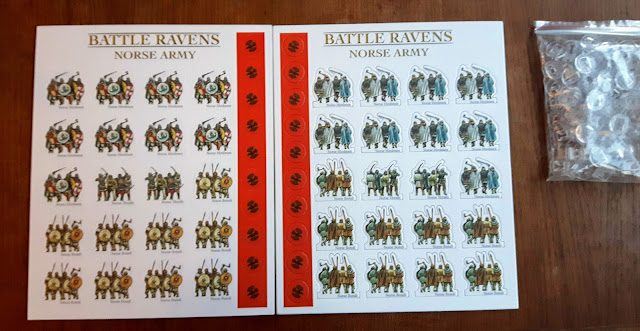 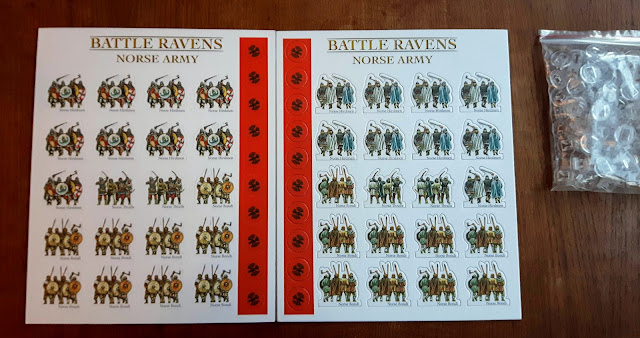 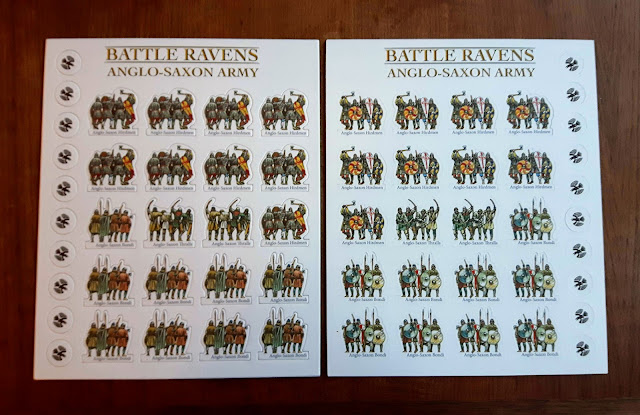 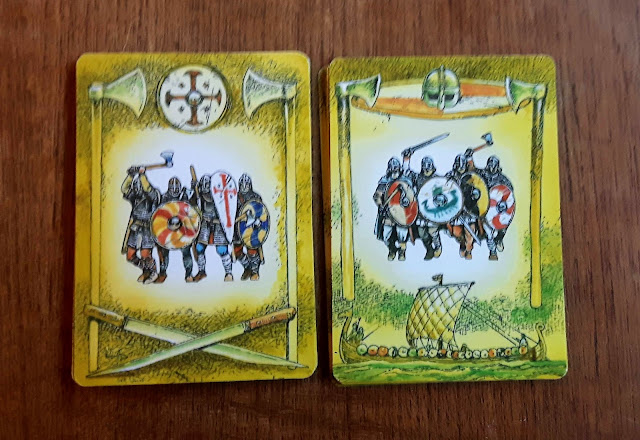 There are also some dice, which I did not take a picture of because you know what dice look like.

The game itself is simple: each player controls one side of the board and populates it with troops. Soldiers are either bondi (regular troops) or hirdmenn (more heavily armoured). There's also a pool of thrall, light skirmishers who function as a pool of rerolls for dice.

At the beginning of each turn, players allocate raven counters to each sector of the battlefield. Ravens are the game's currency: you spend them to attack, defend or move. Allocating ravens to the correct areas of the battlefield is the key to victory here: you want to have enough to power your main attack against the enemy's weak sectors while not weakening your own defenses, and there's a bit of a cat-and-mouse game as players try to work out each others' intentions. The goal is to kill all the defenders in an enemy-held square; if the area is empty at the end of the turn, your troops in the opposite square move in and capture it. Capture three squares and you've won.

It's very simple at heart, but when Allison and I sat down to play it there proved to be enough little wrinkles to make it quite interesting.


The question of how to allocate troops is an interesting one, and -- and here's what I'm really interested in -- it seems to produce some of the concerns that we can see from what little we actually know about shieldwall strategy. For all that's been written about warfare in the early middle ages, we don't necessarily have a very clear sense of what battle was like. The sources do suggest some concerns, though, and they turn up in Battle Ravens. For instance, when you clear a square, at the end of the turn all of your troops in the opposite square will rush into it, and they'll never come back. This is something that we know happened; faced with a breaking enemy, troops in a shield wall would sometimes just rush off in pursuit, abandoning their position within the wall.

Now -- and this is the really weird, counterintuitive aspect of the rules -- attack effectiveness is independent of how many troops you have in a square. Troops are just hit points; you use ravens to attack, and ravens are all that matters. You could have one guy in a square, and if you give him enough ravens he'll run in there and beat some heads. So in theory you could avoid the problem of losing all your troops to a follow-up by, paradoxically, evacuating the square you're going to launch your attack from. It feels a little weird, sometimes.

Fortunately, the game doesn't really work out that way in play. While it's theoretically possible to send in your one-stand wonder team to clear out an opposing square, you have to worry about the possibility of a preemptive strike or counter-attack. If you fail to kill all the enemy stands and they hit back, your one-stand army is going to get murdered, the victorious enemy are going to flood into your square, and you're going to feel pretty foolish. So in fact, a balance of ravens for offense and troops to absorb damage is the right choice in most cases.

Allison, who is generally not a wargames person, and I played and enjoyed this game. It took about an hour -- maybe a little longer with setup time, since it was our first time playing, and we had good fun. I won in the end, but I think we both learned a good amount about improving our raven and troop placement that could make for an interesting rematch.

In my next post (well, no promises. A future post!), I'm going to talk about the thoughts Battle Ravens provokes in terms of historical conflict and games, because I think they're quite interesting.

Here's the rundown on the game: Battle Ravens is going on Kickstarter on 20 November 2018; the Kickstarter will go until 6 December. Expected release date is April 2019. Retail price will probably be £35, but Kickstarter backers will be able to get the game for £30 plus a free Scottish army pack. The core game will include Anglo-Saxon and Norse armies, but they plan on making Norman, Scottish and Welsh ones for separate purchase; each will include counters and tactics cards.

I bought some Mars Attacks models at Salute either this year or last, thinking I'd use them for ... oh, I dunno, something. I am now painting them up just for fun and they seem to be getting a better response than a lot of other things I post. I think they may be well-suited to my speed-painting style.


Anyway, I thought I would do a step-by-step of how I painted them, just to illuminate the technique. 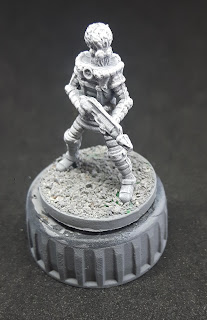 First I texture the base, prime the model with grey car primer and drybrush it all over in two stages, first with a mid-grey and then with white. Normally I would also remove the mould lines, but the material of these Mars Attacks minis makes that a giant pain in the butt and I think if you look at the photos they're not too visible in the finished product. 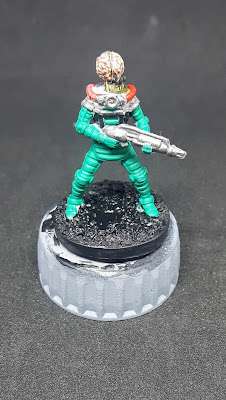 Next I apply the base colours in a thin layer. The main areas of the suit are VMC emerald thinned with blue Army Painter quickshade. The thinned paint lets the highlights created by the drybrush show through. The head is just washes; the very textured surface doesn't really need much else. The photo showed some blank spots, which I went back and touched up. 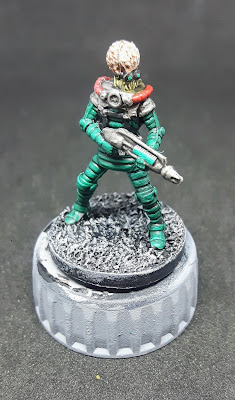 Next I Just give the whole thing a black wash. Again, the highly textured surface of the model really makes this effective. There were also a few areas I wanted to be brighter, so I spotted them in after the wash -- the glowy coil on the gun (which I have kind of failed to cover) and the goggles are examples of this.

I also drybrushed the base. In the final stage, I went back and did some spot highlighting, picking out the goggles again with a lighter shade of blue-green and lining the edges of some of the suit plates with the original colour. I neatened up the base and applied the helmet, which is a bit of a tricky process. 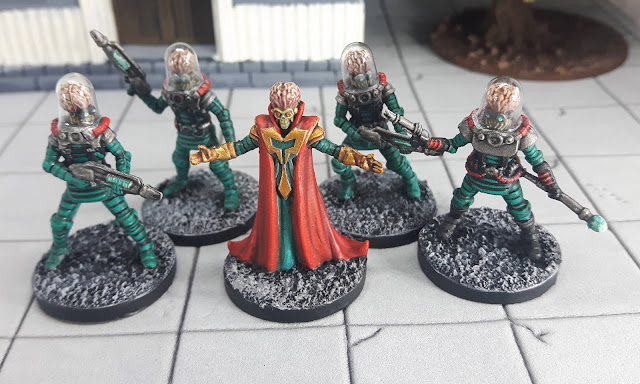 Anyway, here is the expanded squad. I've still got a few more to do but I think they're coming along nicely.
Posted by James Holloway at 03:09 1 comment: