One of the pieces of gaming swag that I've picked up on this holiday is a copy of Dark Druids, written by Robert J. Kuntz and published by Chaotic Henchmen Productions, a little RPG microbrewery run by a pal of mine. You can order it here. The proprietor hooked me up with a copy, which I read eagerly over the past few days. So let's take a look at the scenario. This review contains spoilers, so if you think you're going to be playing this you should probably stop reading now.

Dark Druids is an updated version of an older scenario by Robert J. Kuntz, one of the earliest D&D players and longtime designer. It's designed for quite a powerful group, either a small team of 12th level characters or a somewhat larger group of slightly lower level.

This is the print copy, which costs, I believe, $24 (about £16 at the moment, though hopefully the exchange rate will sort itself out). I don't think a PDF is available, although Chaotic Henchmen's earlier scenarios, The Fane of Poisoned Prophecies and Many Gates of the Gann are available in PDF for $6 (£4) each. I haven't read them, but now I kind of want to! 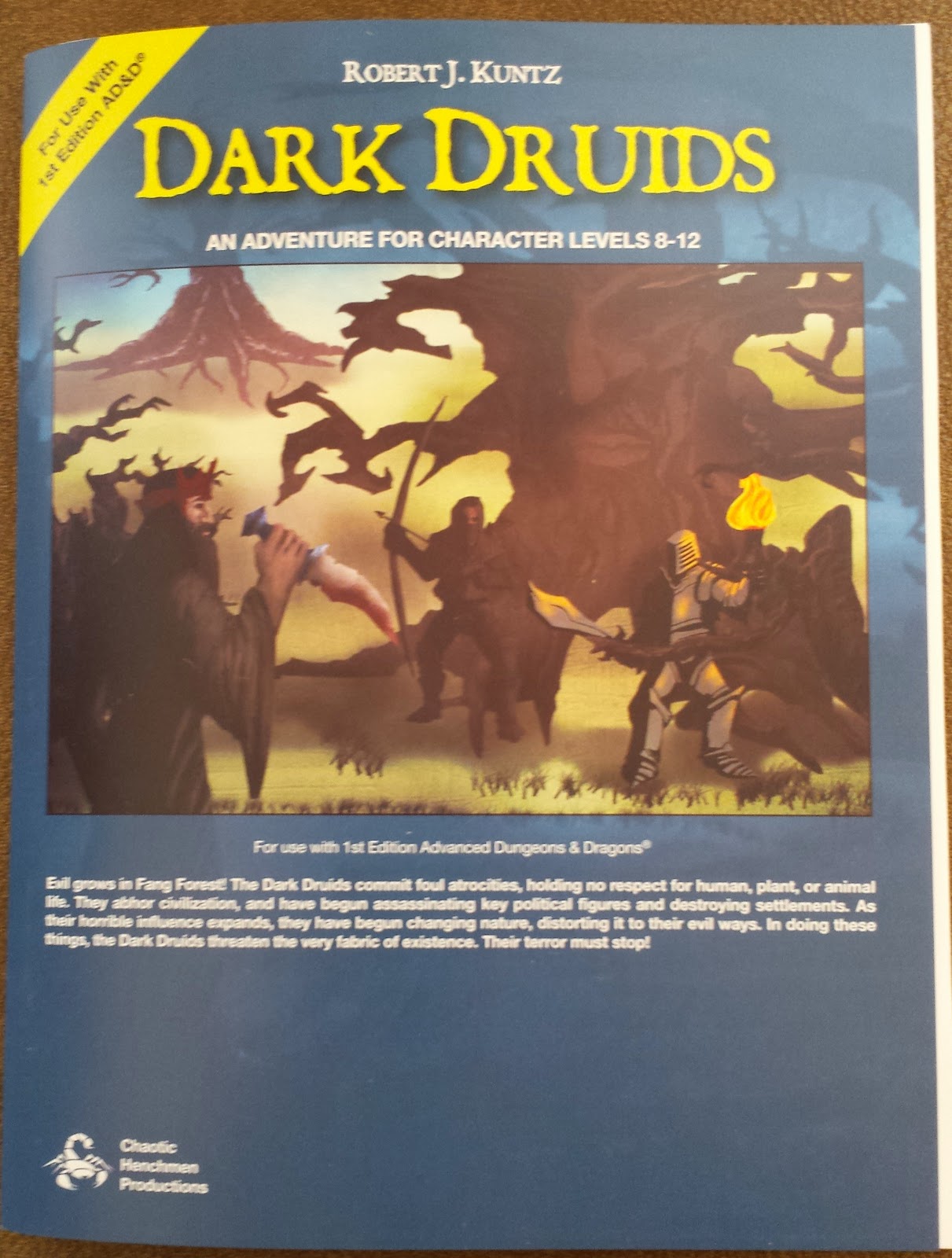 So what's it about?

The basic premise is that your party are recruited by a conclave of local good cleric types to find out what a bunch of weirdo evil druids are up to. There's a side quest of "find out what happened to the last bunch of guys we sent to find out what the weirdos are up to." The lair of the bad guys is deep within Fang Forest.

What the good taskmasters don't know is that there are not one but two sects of evil druids. The main group (called the Black Hats, which is mandatory change number two, right after "conclave of good religious leaders who shout Steel and Spell! in unison") is under attack by a radical splinter faction called the Umber Eyes, who are sick and tired of just worshiping evil and want to actually summon their demon lord. I guess the fact that the Black Hats are the (relative) goodies is pretty funny.

So when the PCs arrive, the Umber Eyes are just mounting their final assault on the three-level dungeon that serves the Black Hats for a base. This means that everyone's attention is distracted, and no one is really looking out for threats from outside, giving the PCs a chance to sneak in and accomplish their mission. This also makes the situation inside the dungeon extremely fluid, something that's going to be particularly important once the PCs get down to the lower levels and start upsetting the balance.

What didn't work for me?

What will I use?

As you may know if you're reading this, I don't play an old-school game. I've read older editions of D&D and I've incorporated a lot of their good features into my campaign, I hope, but ruleswise I am a 5th ed. guy these days. Obviously, then, some of the things in this scenario aren't going to be a lot of use to me. What am I going to use?

So I'm definitely going to use the majority of it, and even the majority of the scenario itself in broad strokes. About the only thing that's no use to me is the spell list and variant class -- and, in fairness, that's because I don't play the game this thing is for, which is not exactly a criticism of the product itself.

Like I said, I don't really play AD&D 1st. It's possible that the spell list is broken or the class is incomplete or something -- I have no idea. I've read the rules and played once or twice, but I don't have good instincts for the rules. If you play the game and have questions you'd like me to answer, though, I'd be happy to!
Posted by James Holloway at 08:26