In my last post, I introduced a project I'm currently working on: creating a 2,000-point army for Grimdark Future while spending less than £55. To create the core of my Human Inquisition army list, I picked up some Frostgrave and Stargrave sprues, and used them to assemble the Inquisitor's retinue. This is going to include:

In this post, we'll take a look at some sample models I've built for each of these units. We've already seen the sniper assassin. 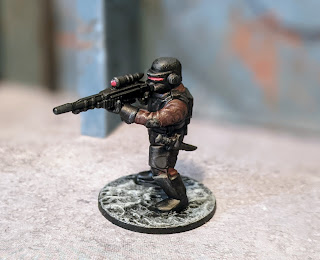 Here he is again, though, just for completeness. 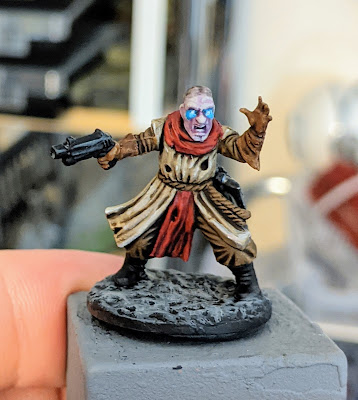 Here's the first psychic. I've decided to go for quite simple paint jobs for this army, but I think they'll look nice anyway. He has a Frostgrave cultist body and arms, with a hand swap from a Stargrave sprue to give him the regulation pistol as well as a melee weapon from the Frostgrave demon sprue. His head is another Stargrave head.
When you think of the Inquisition, you think of red robes, so I want to give all the models in the core retinue some red and off-white (except for the assassins, who of course will be in sinister black). 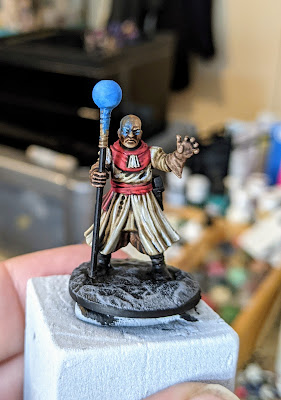 The second psychic has the body and arms of a Frostgrave cultist, although I've replaced the blade of his spear with a bead to make it a staff. The head and holstered pistol come from a Stargrave sprue. His pistol is holstered for drawing with the right hand, which is going to be inconvenient if he's got a staff in it, but no one said these guys were military geniuses. I tried a little OSL effect from the staff, but it doesn't look great in the photo -- in real life, the different swirling colours on the orb are more distinguishable. I may touch up the face, but it looks OK at arm's length. 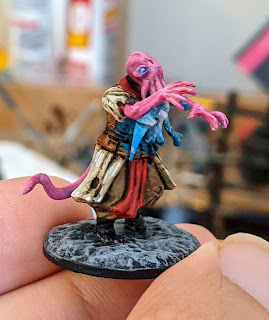 Next, we have the first daemonhost. The body is another Frostgrave cultist, and I wanted to suggest that this is a former psychic; the other two bodies will be more Crusader-like just because that's what I have. The head is a Stargrave head, the arms are from the cultist sprue, and the tail is from the demon set. I wanted to give the impression that the daemons in these bodies have warped and mutated them but are still restrained by some kind of ward, so I gave him a glowing chain of relics around his neck. The daemonhosts are going to look quite different from one another, but hopefully the unit as a whole will work out. 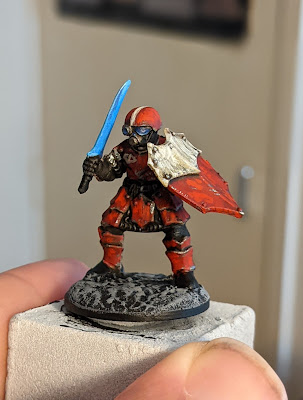 This is the first of the Crusader unit. These are heavily-armoured melee fighters equipped with energy swords. I used the body and shield from a Frostgrave demon sprue to give a suitably gothic look -- these are supposed to be very medieval figures -- but added a sci-fi head from a Stargrave sprue to link it in to the rest of the army. I reversed the balance of the white-and-red colour scheme seen on the psychics so that the unit will be easily distinguishable but the army's colours will stay consistent. I think he looks not bad. I wanted to make the armour look weathered and battered partly for thematic reasons but also partly because I worried the bright red would look a little too Space-Marine-y otherwise.
Posted by James Holloway at 03:14