Painting when I should be ... doing anything else.

Deadlines are coming thick and fast this February, which is both good (because productivity) and bad (because ... well, deadlines!). So I did some painting Saturday anyway, because I have to have a break every now and again or I'll go nuts.

Anyway, the clearing of my painting table continues, mostly with stuff for Frostgrave and/or D&D.

This Reaper Bones priestess has all of the things I hate about Bones -- lots of mushy fine detail and wicked, hard-to-spot mould lines -- but overall I think she didn't come out too badly. She was definitely a speed paining job, as you can tell from the somewhat patchy white robe, but she looks fine at arm's length. Her red-and-white colour scheme is meant to make her match with ... 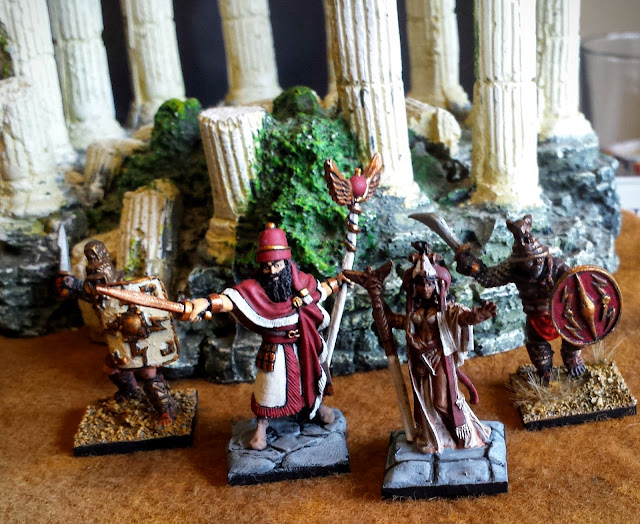 This Lance and Laser model of Takenegi, the Red Emperor, which I painted in like 2002 or 2003 after buying it on one of those trips to Leisure Games where they don't really have anything you want but you came all the way to Finchley so you feel like you have to buy something. Actually, I quite like this model but have never really had a use for him. The Foundry gladiators are roughly contemporary paint jobs with newer bases. I realise they don't match, but whatever. I think they could be a fun beginning for a sort of sword-and-sandal warband. 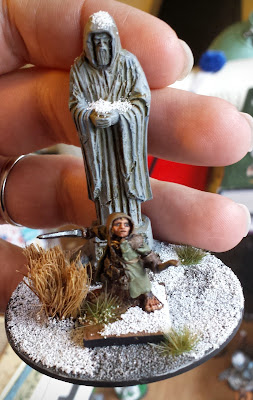 This statue is originally from the Lord of the Rings game, and came from Freecycle. It's a bit of an experiment in using coloured washes to keep all the stone stuff relatively consistent while not just being what TerraGenesis used to call GGWSWGG (Generic Games Workshop Space Wolves Grey Granite) The big clump of vegetation is part of a doormat I got at a car boot sale. I'm not 100% sold on this Army Painter snow, but it's good enough.
Posted by James Holloway at 01:54