Crypts of Indormancy by Ezra Claverie

I went to Dragonmeet a few weeks ago, and while I was there, as one does, I bought things. One of these things was Crypts of Indormancy, a dungeon for D&D in its various guises and reflections written by Ezra Claverie. You can buy it in print and PDF directly from the Melsonian Arts Council, or you can buy it in PDF on DriveThru, where I observe it is currently on sale. I have the hardback edition. 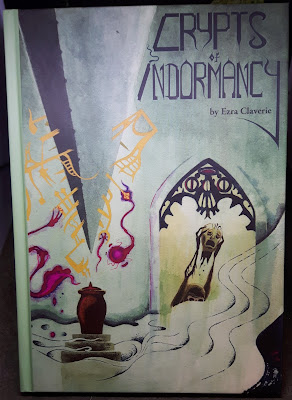 Quick disclaimer: the Melsonian Arts Council published a piece I wrote in an issue of their zine The Undercroft, specifically this one. So I guess I'm a little biased? I don't think so, but then I wouldn't.

Warning, I guess? This review contains spoilers, so if you're going to play the scenario, don't read it.

OK, so what is Crypts of Indormancy? It's a relatively small dungeon: really only about 6 or 7 "rooms" depending on how you count. I would expect it would run for a few sessions, though, as there's a lot to take in and a lot to figure out. It comes in a slim, attractive hardback with illustrations by Andrew Walter. Apparently it came out in 2016, but I didn't get it at last year's Dragonmeet, once again reinforcing my view that I must have literally just walked right past the Melsonian booth. Oh well.

The premise of the scenario is pretty simple: ages ago, an elven general, who was, like the elves seem to be in this setting, a real swine, died. His tomb, presumably full of treasures and grave goods and whatnot, is just sitting up there in the mountains waiting for some enterprising scoundrels to come and loot it.

Now, normally, you would expect that the tomb would be full of traps and defenses, but the twist here is that the tomb itself is the trap, a complex magical device rigged up by the general's heirs and followers to resurrect their leader in a way that wouldn't be obvious to suspicious elven authorities.

OK, so far this is all pretty much straight D&D -- a tomb-robbing scenario with a bit of a twist. But what makes Crypts of Indormancy so interesting is the execution.

Like ... let's say you're approaching the tomb. It has a great big door, which you cannot get into because you don't have the various passwords. Should you try to cast a spell on the door, something called the Temporizing Duplicator swings into action. What this does is nullify the spell and then use the energy to reach back into your past and create a duplicate of you as you were a few moments before you cast the spell. The duplicate shows up and is bewildered and possibly hostile, as one might be, but only for a short time. Gradually, the weird temporal paradox sucks all the realness out of you and pours it into the duplicate and you literally die and now you're the duplicate, who was really you all along, I guess, or not, in some weird abstract philosophical sense.

Or take probably the most obvious monster in the dungeon: the Stertorous Recapitator. These guys are basically guardian zombie types created by a bunch of cruel blasphemy, and they will emerge to attack intruders after a certain point. What they are is headless corpses, and what they do is gang-pile on you with knives and saw your head off, after which they stick your dead blood-gushing melon on their own empty stump, where it magically fuses and now they're chasing your friends around the tomb with knives while your severed head sits there on top of them just, I don't know, shrieking with helpless existential horror, I guess. And then your friends kill them and the last light of unnatural vitality fades from your eyes and you get to go on to the next life with the hideous knowledge that it was your friends that did it and/or that you were a helpless passenger while corpse guys sawed your friends' heads off with knives.

Like, mechanically, they're pretty much just sort of zombies, but they have this bizarre and horrible twist that makes them really fun and memorable.

And there's just a lot of that kind of thing, which I really like. Strange extradimensional monsters and arcane science and a certain amount of Gygaxian-but-for-the-21st-century intentional overwriting.

But all this idiosyncratic verbosity has its downsides, as well. Claverie sometimes takes time out to give a regular old D&D monster a vein of cosmic science-fantasy horror, but sometimes he takes time out to complain about DMs rolling dice behind the screen, a subject on which I assure you any person who is spending £16 on weird hardback art-dungeons already has a firmly settled opinion. And sometimes he spends two pages in a 64-page book on an extended gag about how the ancient game the elven general plays to train himself and his officers in the art of command is, y'know, Warhammer.

While that stuff doesn't thrill me, I feel like this module is as much fun as it is because it's the Ezra Claveriest module there is, and if I have to indulge some gamer grumbling in order to get all this good, chewy psychedelic horror that feels like a small price to pay.

Prep-wise, I don't think this is a scenario that drops easily into most campaigns, although weirdly it would drop just fine into my game world, where elves are a bunch of SOBs and did in fact conquer a load of Polynesian-influenced island cultures. A lot of this is going to make more sense if the characters are grounded in the fictitious culture of the islands, which will help them interpret the tomb in context and give them a motive to mess with it other than just to stuff their cheek pouches with valuables (although that works fine as well).

In fact, with all the focus on the various artefacts in the tomb and their cultural significance (there's even fake citations), I feel like the ideal premise for this dungeon would be to have it be an archaeological expedition. Not that that couldn't also be a treasure hunt, but I do feel like you're going to lose some of the "something's not right" sense if you're describing these weird, blasphemous wall paintings and the characters are just going "yeah, yeah, whatever." You're definitely going to get the most out of this scenario if you give the characters a reason to be invested in its history, maybe by running a few preliminary games set in the area.

Naturally, I got way into that stuff to begin with, but if I didn't like that kind of thing I probably wouldn't have lasted through a couple of history and archaeology degrees.

Ultimately this raises the question of what you're buying modules for, which is not a thing I thought I'd find myself saying when I opened this book. Is the idea to buy a labour-saving tool? That is, are you looking for something that makes it easy for you to run the kind of dungeon you would probably run yourself but don't have the time to write up, a sort of worked example? Or are you looking for something that is a bit different and weird but might take quite a lot more work to integrate? I don't have a clear answer to that: both, maybe? But this is definitely the latter.

Now, as it happens, I think there are probably enough regular old D&D dungeons sitting on my hard drive that I could run them from now until whenever, and honestly I'm more likely to read something and carve it up than run it straight, so this is right up my alley. It's flawed in a few ways: the organisation sometimes makes the exact role of the creatures in the dungeon unclear, and I had to read it twice and kind of keep a little mental sketch map the second time to make it all make sense. I did try to read it the first time on the train back from Dragonmeet, though, so maybe that wasn't ideal. But even with those points, I'm definitely in the more of this kind of thing please camp. I like the way the weird-art-OSR wing are producing things that are clearly D&D and yet clearly also their own thing, and I like the way they don't resemble one another.

So yeah; I liked it.