(This is just one of several pages of monsters for the Monster Man contest. To see the rest of the entries, click here!)
Plague Leech
by Nick Beebe 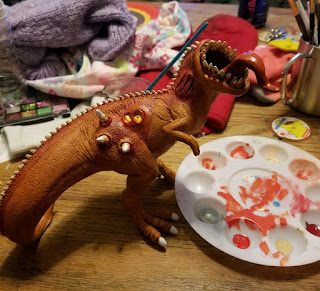 Plague Leech
Habitat
Given their name mostly from their diseased looking body and food source the Plague Leech actually resembles a small reptile rather than a leech. These creatures stand at roughly 3 feet when fully grown and tend to make their homes in swamp like terrain. A brood of Plague Leeches will make their home by digging large caverns under the soft mud of the swamp lands to make a suitable home for the brood mother while the rest of the brood builds small nests above and in a secure circle around the cavern out of mud, foliage, and animal carcasses that can’t be digested.

Hunting/Feeding
Plague Leeches are not the strongest creatures and, if you can get past the texture, make excellent meals, which makes them prime targets for prey and because of that their body secretes a foul smelling bubbly slime that gives the appearance of wounds, decay, and disease as a defense mechanism. Though what the Plague Leech lacks in strength he makes up for in speed, these creatures dart through their swampy homelands at high speeds with some saying they have seen them run on water. This of course has not yet been proven. The Plague Leech hunts in large groups consisting of anywhere from 6 to 20 depending on the fertility and feeding cycle of the brood mother. Like skilled hunters the Plague Leech will follow its target for hours or even days waiting for the right time to strike, when that moment arrives one Leech will begin to make a low humming noise, signaling the others to surround the prey. Once in position the Plague Leeches lunge out of hiding to attack, once the Plague Leech gets a bite its teeth clamp down with immense jaw force and begins sucking the blood from the prey, giving the creature the name of leech. However this isn’t the end of the feed, once the creature is too weak to fight from blood loss the Leeches will drag the prey back to the brood mother who will feast, giving out very little to be shared among the hunters.

Brood Mother
A brood mother can be identified by the color, being slightly darker with a purplish hue and bright yellow streaks starting from the mother and ending midway down the neck. Other identifying features include the size of the Plague Leech, brood mothers are generally larger at about 5 feet in height and having a much larger stomach. She typically gives birth to between 2 and 7 offspring. These offspring are born genderless and kept around the stomach in individual nourishment sacks until they are old enough to eat their way out. Brood mothers are known to eat many of their offspring should the hunters not bring enough food to satisfy her in a given time, it’s because of this that brood sizes vary. Once the offspring reach the age of maturity, roughly 10 weeks after emerging from the nourishment sack, the males join the hunting party while the females engage in a fight to the death. It is every female Plague Leeches instinct to be dominate which can only happen if there isn’t another female. The last female standing will usually venture off to start its own brood or in some rare cases turns her attention to her mother, choosing to fight the original brood mother doesn’t bode well but occasionally the newly matured Leech will overcome her mother and take control of the Brood, eating the body of the old brood mother as a sign of dominance. 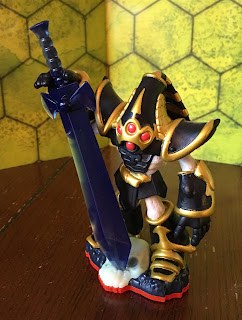 A skulltaker is an undead creature that will sometimes form if a particularly fierce and dangerous fighter is slain on the field of battle and its body left to rot. They augment their skeletal bodies with the remains of their foes and grow to monstrous proportions, often with multi-eyed skulls and extravagant forms.

Skulltakers generally seek to take service with whatever army they were fighting for, though most often this ends in their horrified former companions fleeing in terror or fighting their former champion.  Once their original war is over skulltakers roam the world looking for more excuses to engage in wanton slaughter and pillage, no matter how noble their cause may have been originally.

Skulltakers can use any weapon, but usually fight with two-handed swords that they employ with such skill as to gain +3 to hit and damage.  Against an opponent reduced to less than half hit points they may forego their usual two attacks per round in favor of a single devastating "skull strike".  If this blow hits the opponent must save vs. poison or be decapitated.

Skulltakers can be turned as a vampire.

Sphere of Draining
by Allan Hughes 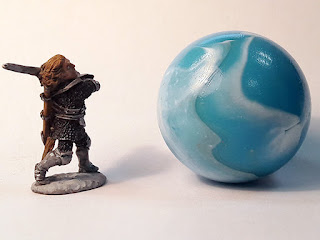 These monsters are composed of concentrations of unspent magical energy from unsuccessful magical workings and spell castings. They float over the ground and having no corporeal body are impervious to all normal (and silver) weaponry; only magical weapons score full hits on the Sphere. The Sphere hungers for energy and will always attack.

They inflict no damage but drain two constitution points each time they score a hit. This draining will negatively affect any HD and saving throw bonuses on the PC for a game time of 24hrs. The Sphere will never kill a PC but on reducing their constitution to 0 will render them unconscious and then leave.